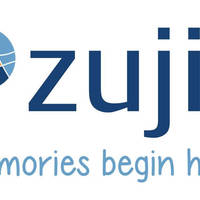 Search over 150,000 hotels at discounted rates! Get an additional $25 OFF Packages with this coupon code. T&Cs apply….read more @SINGPROMOS.COM… Read More

You know how motivational speakers will encourage us to stop and reflect every once in a while?

It supposedly helps us to do better…hmm…

Reality check: survived January and made it to pay day

That’s right people, we’ve made it till the end of January aka ‘trial month’.

That being said…how about treating yourself before that?

Something cheap and delicious?

For those of you guys who couldn’t have survived January without LiHo, here’s a chance to prove your ‘loyalty’.

Just prove that you’re their fan and you can get their Milk Tea with Pearls at just $2!

How to redeem:
1. Be our fan on either Facebook or Instagram (@lihosg)
2. Flash to show to our cashier that you are their follower
3. Enjoy your Milk Tea with Pearls!

This offer will be available at all outlets till 31st March 2018.

Two whole months of Milk Tea with Pearls at $2?

Since you’re here, why not watch a video about a guy who lodged a Police report here in Singapore because he was friendzoned? Seriously. Here, watch it and do remember to share it (and also subscribe to Goody Feed YouTube channel)!

This article was first published on goodyfeed.com

Do you love writing? Do you want a platform to showcase your works? Goody Feed is looking for part-time writers to join the team! Click here to find out more

That despite me previously penning not one, not two, but three separate articles on him.

And I’m not even a particularly forgetful person, you know. Speaks volumes, don’t cha think-

Wait, how many articles did I write about him again?

It seems he’s back, and in full force, no less.

But before I continue, I feel compelled to introduce this mysterious character to you guys, just so you know what I’m rambling on about.

江昭上, as he’s known, had previously shot to “stardom” for filming a video of himself looking for a wife. In the short clip, he pleaded for viewers to introduce him to a “nice wife”, and said that he would offer her a monthly allowance of RM500 and a Vios in return.

Real generous guy, isn’t he? No wonder he was lauded as such.

Nevertheless, things never once got boring after that, and he continued posting updated offers, clips of his new car and other really “comedic” stuff on his Facebook page.

Which leads to his latest, arguably most anticipated post so far.

In the video, the charismatic gentleman offered to be a CNY boyfriend, and he was even gracious enough to accept rental rates at just “one small red packet” per visit.

Thereafter, he humbly expressed how he wasn’t bad in terms of qualifications. For one, he’s 180cm tall, and has a degree. For two, he isn’t “that fat” at just 79kg and his face kinda looks like Wang Lee Hom.

If I didn’t know better I would have thought they were twins! Stunned like vegetable!

Later on, the Wang Lee Hom lookalike clarified that should he be needed to spend the night, he would have to ask for two red packets instead.

Well, I guess he’s going to roll in the evens; that’s for sure!

As a last point, he mentioned how he would be an ideal solution to all the annoying relationship questions your relatives might/will ask.

You can watch the full video here.

Boyfriend for Rental during CNY. 过年你不用担心没男朋友。

“I will get a worse headache if I bring you back”

“I’m worried that my dog will be bored when I return to my hometown. Can you accompany her? You’re quite a suitable suitor for her.”

“I suspect he’s unaware of Wang Lee Hom’s real look. If someone brings him home, the person’s parents will disapprove”

“You’re so “red”! If I bring you back, everyone will know that you’re a scam!”

So what are you waiting for?

You know what they say: “Strike while the iron’s hot.” So book him now before the reservations pile up! Like DTF (Din Tai Fung), they are really in demand! 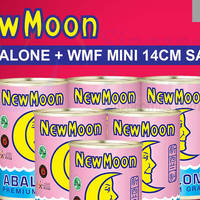 The duck is prepared with Kam’s Roast’s secret marinade, roasted to perfection, and then flecked with the golden flakes for an aesthetically pleasing sparkle.

This auspicious dish is a symbol of abundance, wealth and luck and makes a perfect gift for corporate partners and loved ones.

Kam’s Roast Chinese New Year Takeaway Menu is also Open for Pre-Order Now! Collection can be made on the eve of Chinese New Year or from the 2nd to the 15th Day (17 Feb to 2 Mar 2018) of the Lunar New Year calendar. Usher in the Year of the Dog with our new takeaway set of Kam’s Roast Prosperity Trio at a special takeaway package price at $108! (Usual ala carte price: $123.60) This showcases Kam’s Roast whole signature roast duck, and regular portions of exquisite Iberico Char Siu and super crispy Roast Pork. 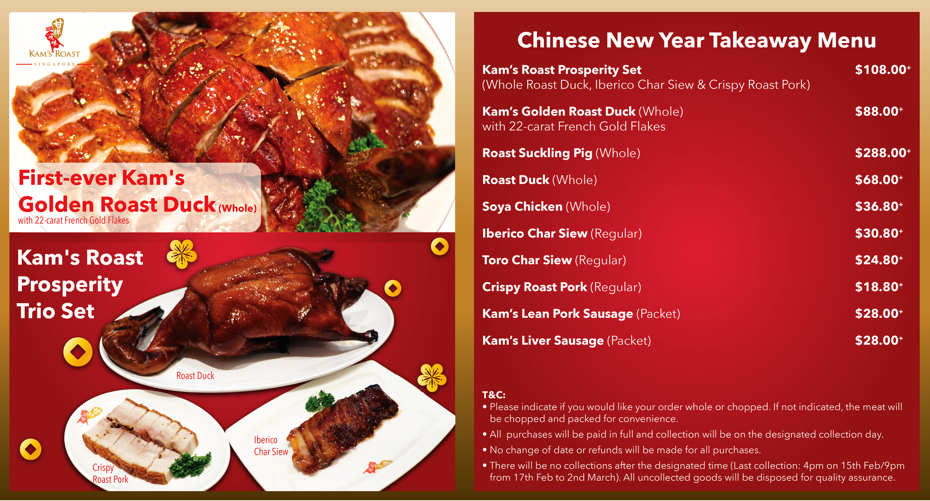 Pre-orders can be made online at Chope: https://cho.pe/kamstakeaway or in person at the restaurant.

Kam’s Roast Singapore is offering the same quality and recipe of roast meats as Kam’s Roast Goose, the flagship outlet in Hong Kong which was awarded a Michelin Star within 4 months of opening in 2015 and has kept its star every year since.